‘It’s something that you just feel’: Local nonprofit leaders talk about their impact 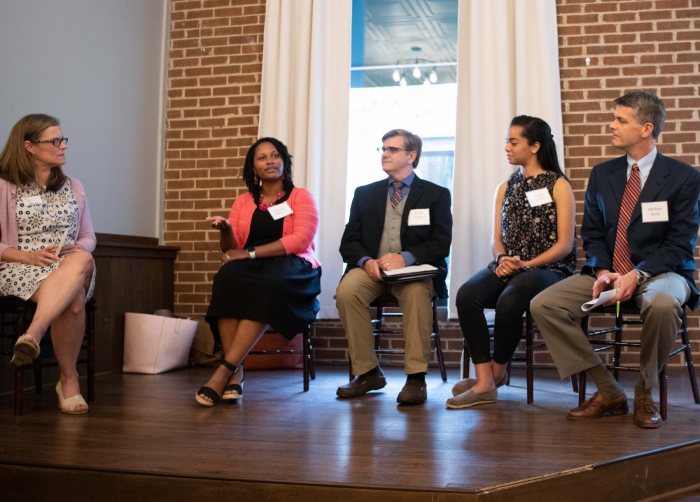 On September 26, the Charlottesville Area Community Foundation invited four nonprofit leaders to talk to donors about their work and its impact. Their wide-ranging conversation, moderated by Katie Kling, the Foundation’s Donor Engagement Manager, suggests how varied and critical is the work of local nonprofits.

All four groups have received Enriching Communities grants from the Foundation.

According to Wilkerson, AATF seeks to recruit, support, develop, and retain black teachers in Charlottesville and Albemarle County. She emphasized how important it was for black students to see teachers who looked like them, but also how critical it was for teachers to have a support system. When she began teaching, she was one of only two African American Spanish teachers in the region.

“When I faced difficult issues in the workplace,” she said, “AATF was the space for me that kept me from quitting my job.”

Rodgers administers JABA’s insurance counseling program, which helps seniors navigate the complications of Medicare and Medicaid. He spoke of one woman who, had she not changed her prescription program, would have been priced out of life-saving drugs. “Growing older in our society is hard,” he said. “So we try to give any help that we can.”

Harris grew up in Fluvanna County, where there were not many opportunities for kids interested in the arts. She founded Empowered Players to fix that—with theater classes, mentoring opportunities, and performances the whole community can attend. “With theater and arts it’s hard to quantify impact,” she explained. “It’s something that you just feel, and something that you see students experience very directly. It’s a student who says, ‘I didn’t know I could do this, but now I know that theater is for everyone.’”

Reilly’s group provides no-interest loans to small and mid-sized organic farms in the area. “Our loan program solves a big problem for local farms,” he said. “Low-income families running these farms are just simply shut out from the traditional financial system.” His group helps them grow and expand, like any other business.

“We’re just thrilled to be serving our communities,” Harris said. It was a sentiment shared by everyone on the stage.